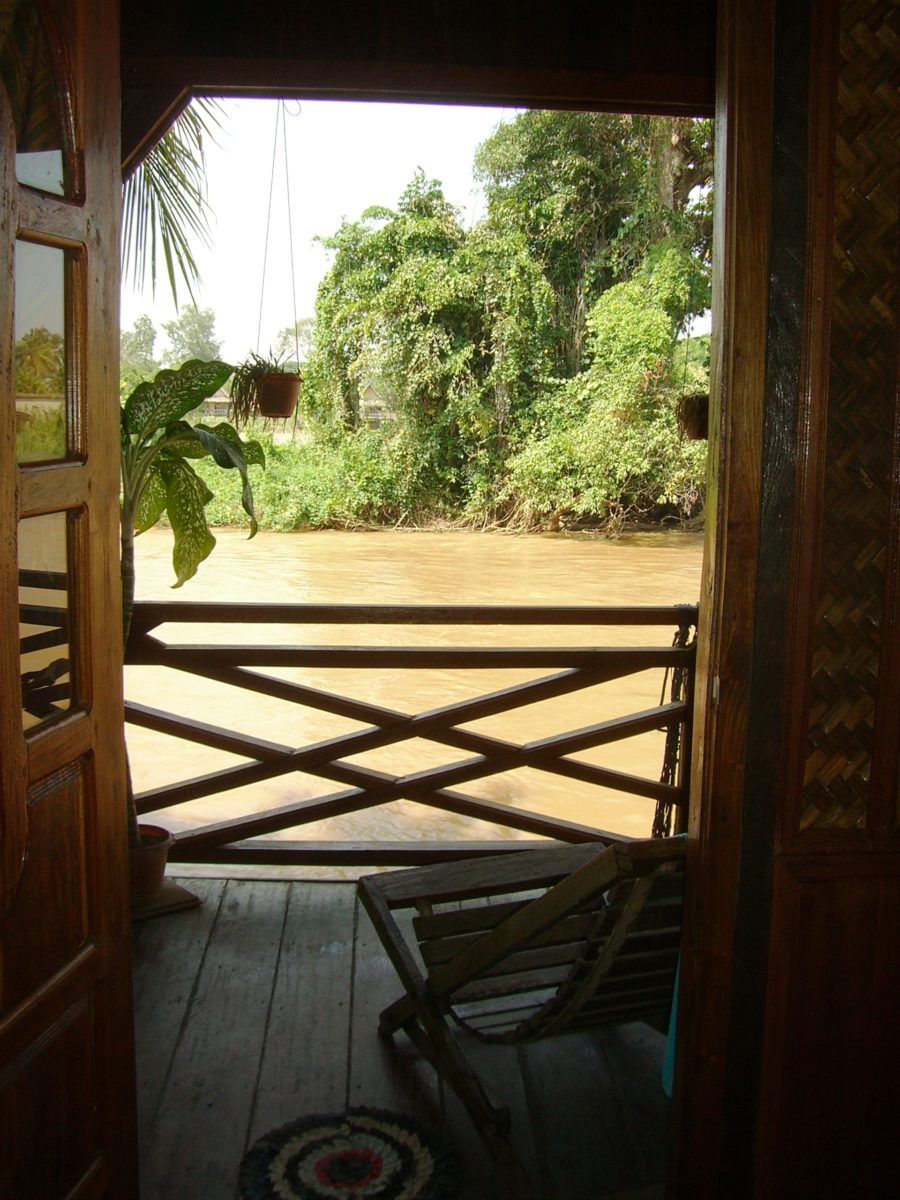 Vang Vieng Tubing may be incredibly unsafe, culturally void of any value and be a downright pleasure seeking activity. But loved it. And if they still do it one day I’ll take my kids to go tubing in Vang Vieng.

But then I’ll balance it with a stop in 4000 islands Laos which are incredible, but more on that in a moment.

Vang Vieng is a gorgeous little place created solely for the entertainment of travellers; there is no culture here. It is famous for banana pancakes and Vang Vieng tubing. Yes, tubing. The general idea is this..

…hire a large inflatable tractor inner tube, jump onto it, float down the river until you see a local man holding a large bamboo stick. Grab this stick, pull yourself to the river bank, get out and go for a drink.

While having a drink & listening to music if you get a bit hot you climb up a 30 foot ladder to the top of a tree, grab the trapeze, swing out, give a Tarzan-esque scream and throw yourself into in the river. This turns out to be extremely good fun, so much so, I’ve included a video clip of me doing exactly that – click the link below..

Watch this video of my Tarzan swing when we had a Vang Vieng tubing pitstop: Trapeze Vang Vieng, Laos

Yes, just to clarify for all the Health and Safety Officers wearing high visibility jackets reading this; get drunk, lie in the sun, then throw yourself off a 30 foot swing into a river. What could be safer?

I prescribe this at least three to four times along the route as you float down the river and if the moment captures you; you can grab a happy shake while you’re at it.

For the record – if ever visiting a massage in Asia (no, I didn’t), which seems to be every other shop – it is worth declining anything that has `Happy` or `Shake` in the title. But when it comes to food or drink – as long as you have the rest of the day to wander around with a stupid grin on your face and don`t need any physical coordination to function it seems quite the done thing…

The remaining hours of the day floated by with only the interruption being several other guys down river holding out bamboo sticks tempting you to visit their bar. Back on terra firma we spent the rest of the evening walking around like a group of wombles giggling and lounging in bars that have beds for seating areas specifically designed to cultivate a laziness I`ve not witnesses since I was at University.

A point to make; the bars with beds are packed with other travellers all fixated on 24 hour re-runs of either Friends or Family Guy playing on the TVs; I’m not sure what defines a religious movement; but I don’t think it was far off it. Worshipping at the televised alta of American sitcoms..

Once we regained clarity we left the hedonistic fun park to head south to 4000 Islands in Laos.

One coach, followed by minibus dropping us off next to a river, culminating in a canoe ride for several hours that takes you to a remote set of islands without electricity or much else. What they do have is amazing views, total tranquility and wooden huts on stilts that sit over the lake which is camouflaged as a river littered with thousands of islands, secluded beaches and rapids.

These are not uninhabited islands, many play host the basic necessities of village life; a few schools with barefoot kids running riot and the noise of young innocence at play time. There are dirt track roads that meander through various villages and the dolcit hum of generators begin when daylight stops..

Staying at the 4000 Islands Laos

When you arrive unannounced at an island you step off your canoe, tip the driver, and begin to aimlessly wander around with your backpack until you are greeted by someone offering a spare room. You have a look and agree a price for your duration of stay, it is all very laid back. The rooms are all virtually the same; the only real difference is whether you are on stilts over a mass of water or further inland.

I always opt for being over water, for me it is an extra $1.00 per night well spent. You pay up front, throw down your backpack and make full use of the built in entertainment center (two hammocks).

The highlight of the day is sunset, the drawback is the wildlife.

Now don’t get me wrong, I love all animals, and to be honest I don’t scare that easily (except with skunks – they freak me out, oh and rats..) and I know some people reading this will yawn and say; ‘hey man, that’s part of the trip living with rats running around’ and yes, that’s fine..

I’ve slept in the jungle, I’ve eaten live termites off the trees, I’ve chased snakes out of the way, hell I’ve even carried a live chicken whilst riding a camel for four hours as a gift (long story). I like nature and travelling with it.

But I hate rats. Full stop.

The first night we were awakened with the noise of rats scurrying in the walls. As mentioned, I can live with most bugs and creatures, I’ve spent many a night with cockroaches and spiders as my hors d’oeuvres to a meal. But those that know me will know that of all things creepy & crawly, it is the rats I can`t hack. They just freak me out (even more than skunks).

An example of this is when the 3 girls that were our neighbors back in London came banging on our front door, screaming that they had a small mouse in their kitchen. Obviously I came to the rescue immediately of the damsels in distress by picking up a broom stick (saying something along the lines of “don’t worry girls, stand behind me, I`ll protect you”) and entered their apartment. I moved the toaster with the broom, the mouse jumped out, I screamed like a little girl and ran out the house leaving the damsels to deal with their own distress. Needless to say they never did ask for my manly help again…

The second night our hut had an infestation of fire ants – these things are huge mean bastards.

They can lift a car and have been known to carry away a whole adult human (well almost).

After almost a week we bid our furry and creepy roommates fairwell and make our way to Cambodia..