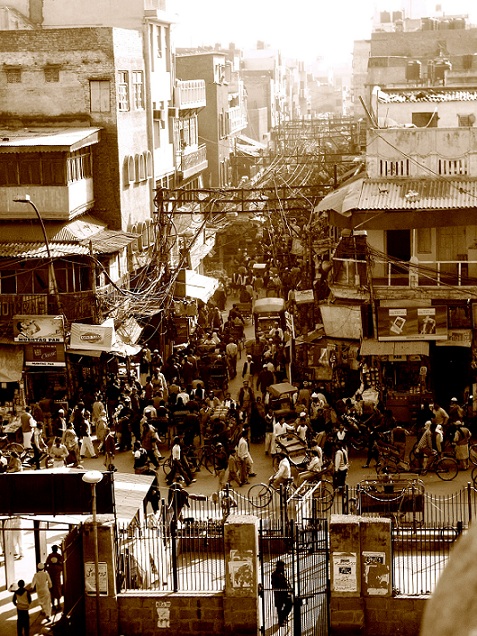 Good morning India! It’s 2am and we arrive at Delhi airport; greeted by another world – a combination of menace through smiling faces welcomes us. We jump straight into a 1920`s looking cab and head to Majnu Ka Tilla – the Tibetan refugee colony north of Delhi proper.

First things first – every country is a contradition; a mix of old and new, good and bad. I know first hand how cosmopolitan and modern some parts of India is, but from my humble experience – not so with Old Delhi (or the bits we saw anyway)..

The drive from the airport to our hostel is an instant shock; the mental equivalent of a Russian ice bath. The streets are lined with the homeless sleeping under wraps, small burnt out coals, the glowing embers of dried cow pats used as fuel gently smoke along the roadside for their uneffecting warmth – Delhi is cold. It is foggy, it feels eerie. For the capital of India it is empty at 2 o’clock in the morning except for the homeless and stray dogs. An hour later, my hand almost at breaking point through Anna`s continued squeezing, which gets harder as each minute rolls by, we arrive at our new hostel, it is decent enough – but bloody cold.

The morning brings fresh light to our new continent that we will call home and occasionally prison for the next few months. The Tibetan colony is a haven of relative peace, a labrynth of narrow cobbled walkways housing numerous Tibetan market stalls, we like it. It feels good.

But it is bloody cold.

The tuk tuk takes us to the Red Fort. Due to terrorist threats at the time of our visit Delhi is on high alert and everywhere with a doorway has an armed guard and makeshift metal detectors – a series of magnets with a bell…

The Red Fort is a large…red….fort and to be fair a retreat from the manic streets outside. We then attempt to head to the biggest mosque in India – this was surreal and intense. The fog, suspended in the air created a subtle `dynasty haze` over the whole scene. To access the mosque you must walk a straight path for about 500 meters lined with street sellers, tuk-tuk drivers, children running naked. In the distance through the mist you see the steps leading up to the huge doorway of the mosque. The steps are at least 100 feet wide and 70 feet high, sporadic groups of beggers, the deformed and street sellers are scattered amongst the steps – the noises and smells are overwhelming.

To the left and right are empty fields with broken fences cradling more of the homeless in family units around small fires and children playing cricket barefoot, a stick for a bat, bricks for a wicket. The atmosphere is dreamy with a feeling of intrusion.

The intrusion is us.

For the capital of India we thought there would be many tourists but they seem to arrive and leave, or at least not spend any time in Old Delhi. We – after being turned away from the mosque – head further into the heart of Old Delhi, to its main artery – Chandni Chowk – a large bustling market street.

Squeeze everyone that lives in London into that one street and you start to imagine the noise, the pollution, the density of the people – personal space is only a fantasy that lies waiting for you in your guesthouse, it vaporises the moment you step outside.

And it is bloody cold.

There are also no women on the streets – India is a mans country full stop. Women are not out and about, the only ones you see are the occassional tourist or the geriatric.

Old Delhi, especially Chandni Chowk and some of the subterranean markets is a constant assault on your senses. Yes the intoxicating and alien smells, the visual plethora of scenes; life, death, poverty, wealth all simultaneously being played out before you can be overwhelming – but I sort of love India for that. It is more the total and utter lack of privacy both physically and emotionally that is the most alien to our British sense of reservation. Any question or conversation you have, in fact, any sound that is expelled from your mouth is accepted by everyone within earshot to be taken as a public invitation to wander over, stop whatever it is they are doing and just stare.

Now I`m not talking a little sideways glance, or even the curious staring you receive in China, but full on, undiverting eyes that menacingly stare. You stare back, you smile, you nod hello. None of it is reciprocated. It is, in a word – unnerving. White vacant eyes on a backdrop of darkness, they look deep into you.

But I love it. The organised chaos, agreed anarchy, it is mayhem at its finest and it works.

We get stuck in, buying spices, trying some mita-paan (a combination of betel nuts, white lime powder and sprinkle of this and a dash of that all wrapped in a wet leaf that you stuff into your mouth by the side of your cheek for an instant numbing affect, great minty breath and spit every few minutes until you gob the whole lot out). I enjoyed it, Annas shoes didn`t – Come on! One bad shot…and I never hear the end of it.. even now!

The downside of the mita-paan is the glowing red teeth that are a consequence of long use..  Anyway, I digress.

Trying to leave Delhi is not as easy as it sounds – our first destination is Varanasi – the most holiest place in all of India. So we make our way to the train station and start a game I have never played before.. let the Indian Games Commence!