Mojave Desert Fever – how not to die by two stupid backpackers.. 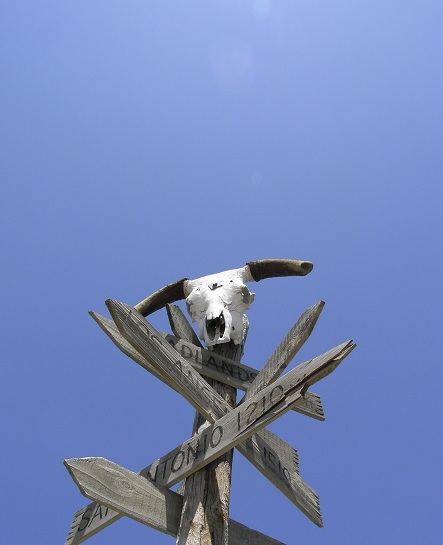 Just take that in for a moment; the Mojave Desert.

Whenever I heard stories of tourists getting stranded in the middle-of-nowhere I always thought – how stupid, how obvious that you`re going to get lost if you wander into the middle of a jungle or start skiing off-piste by yourself. Idiots!

Not so, it is easier than you think…

This is how it starts:

“oh look, there`s a trail off the main road heading into that sandy bit, maybe we can find somewhere to camp (wrong), it must be safe as there`s already a trail (wrong again), I`ll just drive a little way in to check it out (wrong again, and possibly for the last time)”.

This is exactly what we do.

But I`ll put it in context – we have been driving for 8 hours, it will be dark in less than two hours, all campsites are booked, all the hotels are mega-expensive, you can`t afford not to check it out. You think you`ll drive along the trail for a bit, spin it round and carry on. A minor detour, what`s the worst that could happen? You lose an hour. Big deal.

We drive along the trail following its twists and turns and on a couple of occasions have to decide left or right, feeling very safe in our air conditioned car.

You believe that eventually you will end up back where you started on the trail. But after 30 minutes of driving you grow suspicious that this may not be a single loop but a warren of interconnecting trails, maybe not as easy as first thought…

45 minutes later you suddenly notice that you are no longer on the trail, the trail has evaporated like the moisture outside in the burning heat.

We are now driving not on a trail but following the line of least resistance, the makeshift gap between cactus and jagged rocks, always watching for imminent canyons that have a habit of just appearing.

This is the very first flutter of panic, we drive a fraction faster, but it is controlled, it`s just butterflies in the stomach that you can ignore, maybe it`s just something I ate?

We`ll simply turn the car around and drive the way we came.

Have you ever noticed how rocks and cactus and sand can all look very similar? Many and much of it has absolutely no redeeming or unique features whatsoever, they are just – there.

We are now facing roughly the opposite direction to which we were driving and laid out before us is total, unadulterated, barren desert.

This is the second point of panic.The light has changed, dusk is drawing closer. Anna has now gone ominously silent. Mere nods and shakes of her head are the only communication. I have turned into a deliriously optimistic character expelling verbal diarrhea about how it will all be fine; the trail is just round the corner, I keep repeating. But this is also the point I now start to realise the gravity of our situation.

An hour later, we are, as much as I hate to admit it, lost. Lost in the desert and have been for some time.

Then a moment of genius hits us – we`ll turn off the engine and listen for the sound of the road and just head in that direction, all we need is to get our bearings.

Now there is no hiding it, we are shitting ourselves. Our lack of preparation, knowledge and awareness tilts the balance of survival firmly out of our favour. We have less than a 1/3 tank of petrol, a little bottle of water and under an hour till sunset. I get the feeling that if we run out of either petrol, water or sunlight we may well be doomed. Literally.

Who would come looking for us?

We continue driving, but at this point we are well aware that in the mass expanse of the Mojave desert we could easily drive at 100mph for another 10 hours and still be nowhere near nowhere. This is now a deadly serious situation.

It is very rare in life to have moments when you actually question your mortality; when you suddenly realise the opportunity to really die has become quite real.

Panic has now migrated from a fluttering of butterflies in my stomach to a hurricane in my pants.

We initiate our new strategy every 10 minutes – stop car, stand on roof, look and listen – for anything.

Silence, followed by just the barren blurred vision of tumbleweed in the light, dry, wind; the ubiquitous landscape of the Mojave desert.

An hour and a half later, panic now has us in an iron grip. We are cloaked in a veil of despair and confusion. It is dusk, our car lights are on, I am frantically driving in every direction, searching, praying, for a way out, a rat desperate to jump a sinking ship.

Anna is murmuring her newfound mantra with tears welling up and occasionally dropping on her lap.

I fear we are being taken over by blind panic.

We both are thinking the same thing but not saying it. The sun is starting to set, our gas tank is now just a 1/4 full, we refrain from drinking any water. We both silently wonder – will we be found in a week, slightly decomposed. Will we be another random news story for others to think `how stupid driving into the Mojave desert just before sundown`, our hearts sink with the sun.

Close to two hours later at a different spot (or at least we think so) we turn off the engine & stand on the roof hoping for something.

By now I have sold my soul to the Devil and promised God everything for us to make it out alive.

Then out of nowhere we hear a distant rumble! I instantly feel bad about double booking my soul.

I run towards the noise scanning the dusty shimmering earth for a road, for a car, for someone. But the noise retreats as quickly as it surfaced. But for an instant another noise! A car for sure! I can`t see it but jump back into the driving seat and drive in the direction of the noise, fast.

Suddenly we see a fence.

I can`t quite describe the feeling of seeing something man-made after what we went through. We both shared looks of disbelief, have we really found a fence, scared to believe it in case it`s just the line of a cactus branch. But it is a fence and we follow it to something looking more like a track.

No, not a sign from God but a standard `STOP` sign at the edge of the track – we had made it! Anna burst into a combination of tears and smiles and we hugged with joy that we would live to tell the tale.

1 thought on “Mojave Desert Fever – how not to die by two stupid backpackers..”