Laos – Jewel of the Mekong 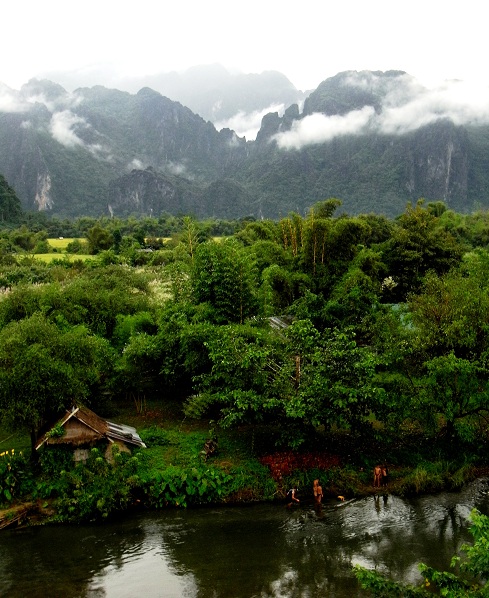 Laos has the strapline – `Jewel of the Mekong` and it truly is. Laos is a magical, undisturbed land that is filled with hospitality and innocence that seduces you from the moment you arrive and steals a piece of your heart when you leave.

We land by paper airplane in Vientiene; the capital of Laos. November is the start of the river boat racing festival – groups from around the country gather to race 50ft long canoes against each other down the Mekong, this is coupled with a night of floating-candles. You buy a small package consisting of a flower with a candle and incense stick, you light both then launch them onto the river. The view is off a thousand twinkling lights floating along the Mekong, mirroring the millions of twinkling stars above. For a small fee you can give your candle to the little kids that will swim out to launch them for you. I thought this was a free service until they all stood around me with rather angry expressions and I eventually paid up.

An example of the innocence and charms of Vientiene is the government has a curfew of 11:30pm so that its youth will not turn out like the rest of the world and that the towns keep their way of life – even in Vientiene the capital of the country; we were tucked up in bed with coco by midnight every night…. well….almost….

For such a small country there are numerous gastromic treats; on our first day wandering the city’s dusty streets we sit down at one of the ubiquitious street food stalls with a few plastic children sized tables and chairs scattered around to enjoy the famous Papaya salad. I cannot describe the heat of this thing; one of the main ingredients is birds-eye chillis which are smashed to a pulp and mixed through the salad. The heat this bad-boy salad causes upon departure of your body is defiant against even the coldest of fridges housing a few prepatory sheets of toilet roll. As I placed my wooden chopsticks in the bowl they immediately start to smoke and spontaneously combust, if any of the salad accidently touches the outside of your mouth it burns, it burns like a red-hot rivet has been driven into your skin – we are talking HOT HOT HOT!

Now I’m not one to shy away from spice or dare I say it, the odd bit of chilli, but this thing was nuclear. When asked how may chilis they put in they said “oh, around ten” I asked how many they use when making it for themselves and they replied with about 20.

It was so hot and we so hungry that we opted for the deep fried crickets instead – much safer. I spent an afternoon randomly assisting two old ladies preparing their crickets. A simple production line; you grab a cricket floating in a bucket of water, pull off its abdomon, remove its wings and pop it into another bucket of water. These are then deep fried and usually sprinked with a salty-chilli type seasoning and are actually quite tasty. Once you remove the thought of them being crickets they are really just a native crisp; pretty much all protein, bit salty, bit spicy, bit crunchy, what’s not to like? Besides them still looking like crickets of course…

The food got a little worse before it got better; known as Balut in the Phillipines but eaten all over Asia; there are a surprising number of street food sellers dishing out the infamous delicacy of semi-developed duck foetus served in its shell as a whole egg. I have to admit – this didn’t go down well. The server cracks open the top to reveal a dark center with a semi developed duck foetus  curled up floating in liquid, you look at it, supress the fear of life that has suddenly entered you and knock it back like the final shot of tequila you know will do an encore two seconds after consuming. It attacks you on every level; mentally you know what it is; it smells of rotten eggs, it looks not that attractive. But I couldn’t resist; the opportunity to engage in something I know I will probably never have the chance to try again, to sample a food that is a staple to the local communities all over Asia, my sense of adventure got the better of me (not for the first or last time).

My eyes watered, Anna smiled and I think I shed a tear. Let’s just chalk that one up to experience..

In contrast; the crispy fried banana pancakes are to die to for! They are freshly made on the spot; little dough balls flattened on a skillet; sliced banana thrown in, folded, fried in butter, drizzled with condensed milk then chopped into 9 bite size pieces. These were the ones that as curfew approaches and you have moments to spare you run like a lunatic to find someone selling them and bring a couple back to have with your aforementioned cup of coco.

Our stomachs settled and under the light of a new day we headed to a famous temple called Wat Sok Lu Prubang. The real reason for visiting this temple was in fact the herbal sauna and massage. You arrive by tuk-tuk wander through the temple to find a little wooden shack with steam drifting from the top and every other crevice with a gap. The sauna is enfused with citrus, lavender and a number of herbs.

I boil away in the sauna for a while then lie down to enjoy a full body massage. I have never had so many joints creaked and pulled as I did outside that shack. You are contorted into shapes and positions that I have only seen escape-artists and porn-stars perform. As you lie on your front your legs are pushed all the way back until they touch your spine and creak, you are lifted and stretched over the masseuse’s knees until the joints in your back crack, the sound is shocking, your mind can’t help wonder whether you will ever walk again, but the final feeling is amazing – we floated out of there like Thunderbird puppets on bungee strings.

One of the other big attractions is the opportunity to meditate with the monks in the temple.

We walk into an open-air temple with three rows of cushions all facing the orange robed monk at the front. At first he tells you of the ethics behind the Buddist philosophy giving you a snapshot of their beliefs; one major aspect is respect for all living creatures from elephants to the ants that walk the ground and all must be treated with care.

This proves a sore-subject as while meditating with 29 others in the room, through the deafening silence I feel a mosquito land on my arm, I open one eye, peek at the little bugger sucking away and without thinking give it one almighty SLAP on the side of my arm.

As soon as the sound of this obvious mosquito repelling slap hit the room I knew I shouldn`t have done it as all 58 eyes opened and looked directly at me while I replied with a sort of embarrassed smile, look over my shoulder with a `who was that then?` look and quickly close my eyes to continue meditating…

After many apologetic facial expressions and a quick prayer to Budda asking for forgiveness Anna & I made our way north to Vang Viene, yes the happy shake and river tubing capital of South East Asia!