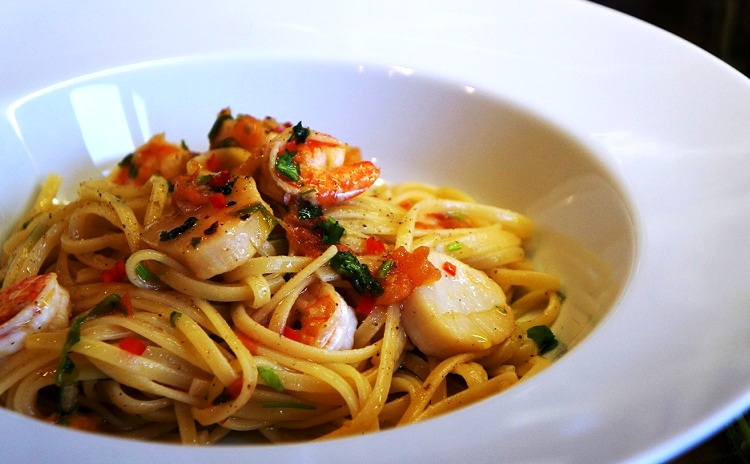 My seafood pasta recipe is simple, elegant and damn tasty and more to the point it is cooked in 10 minutes flat! I prefer to make this as a seafood linguine but any pasta will work.

I’ve slightly Greek-ified this particular recipe with the addition of a splash of Ouzo to the dish. No, not just because I thought I could call it Greek, but the Ouzo compliments the seafood incredibly well.

Fennel has long been a partner in crime to seafood, that slight aniseed flavour that brings a freshness to most seafood dishes and is the exact subtle flavour you get with a splash of Ouzo.

This seafood pasta recipe is incredibly versatile as either a quick, healthy midweek supper or you can invest a bit more in the seafood and turn this into a seafood linguine fit for any decadent dinner party.

Check out my other seafood recipes…

The thing I love most about a good seafood pasta is plenty of seafood and enough pasta to soak up all the flavours and juices of the dish.

You will be right on both counts, however, the olive oil will emulsify with the rest of the juices to create a delicious sauce and the garlic will melt away to leave a subtle depth of flavour that will blow your tastebuds away.

Watch my video recipe of making seafood pasta – in 10 minutes.

As mentioned earlier this is a very versatile recipe. If I’m making this during the week I’ll grab one of those mixed shellfish packets and throw that into the dish. If I’m having people round (or trying to impress my wife!) I’ll upgrade the shellfish to the ones listed below to add a touch of luxury to the dish.

Anyway, enough me banging on about how good my seafood linguine recipe is, here you go!

* Half a dozen clams or mussels (washed and cleaned)

4 Scallops cut in half (horizontally)

Goes well with romantic conversation and a couple of stolen kisses. And the rest of the wine of course…