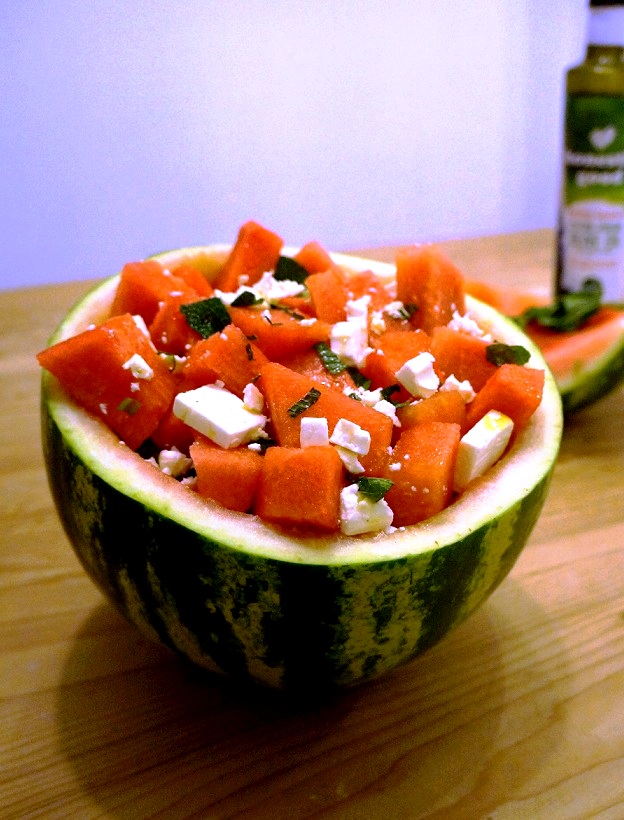 Watermelon Feta Salad served in the watermelon – a watermelon bowl if you like! Using the watermelon as the serving bowl makes this one of my favourite Greek salad recipes (mainly ’cause I have less to wash up at the end!).

My watermelon feta salad recipe, using the watermelon bowl looks brilliant, tastes delicious and is the perfect dish to share with friends or family – it begs to be placed in the middle of a table to be adorned by everyone and just let everyone help themselves!

This super refreshing watermelon feta salad recipe touches on lots of traditional Greek flavour combinations and is one of my go-to BBQ salads when you want something a bit different.

Check out my video recipes below by Simply Good Food TV of making a watermelon feta salad served in the watermelon (like a big beautiful watermelon bowl!):

Goes well with BBQ’s or a refreshing winter lunch and lots of ‘ooohs and aaaahs’ and ‘isn’t that clever’!

Oh, and for a great watermelon cocktail; if the watermelon is ripe you’ll get lots of juice as you cut it up; pass this through a sieve, add a shot of vodka, few mint leaves and a touch of brown sugar and voila! Cocktails as well!

Now don’t say I never give you anything!