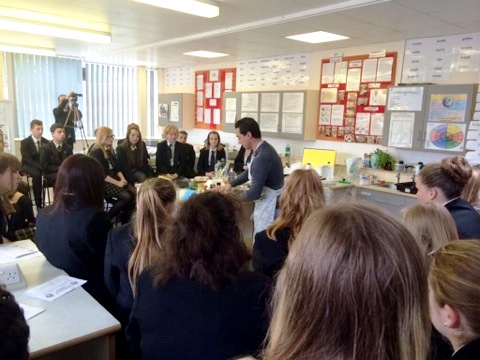 Theo Michaels, who made it through to the semi-finals of the hit BBC TV series Masterchef competition, was personally invited to return by headteacher of Sheredes School Ced de la Croix. Theo ran a master class with a group of 40 year nine and ten students yesterday (Thursday June 5).

Read the full article on the Mercury Newspaper here.

Sheredes’ head of technology, Alison Kirby, introduced Theo who then cooked up a mixed berry cheesecake and Moroccan-style chicken and couscous dish.

While preparing the chicken dish, Theo explained how to make a base dish and transform it simply by varying the type of herbs and spices used.

He demonstrated using the herbs grown at Sheredes’ own eco-school garden, which left him much impressed.

While the dish was cooking, Theo took questions from the students.

He revealed that his origins were Greek Cypriot and he grew up with family, friends and food at home, and to see people eat his food was his greatest pleasure.

Students and staff were also surprised to hear that Theo applied for Masterchef on the spur of the moment, after returning from holiday.

Finally, Mr de la Croix asked Theo which teachers had influenced him during his time at Sheredes School, and Theo mentioned geography stalwart Steve Troake, who remains at Sheredes to the present day.

Theo said that he hadn’t really appreciated the effect of the knowledge he gained at Sheredes until after he had left.

At the end of the demonstration, students and staff were able to sample each dish, before Year 10 student Megan gave a short vote of thanks and presented Theo with a card of appreciation.

Theo’s relationship with the school is set to continue, as he returns to Sheredes on Wednesday July 9 during their creative arts open evening, to fill the role of judge their Masterchef competition, where pairs of students will be cooking dishes based on Theo’s demonstration.

Sheredes’ new year seven students will also be in attendance with their parents, forming part of the audience.