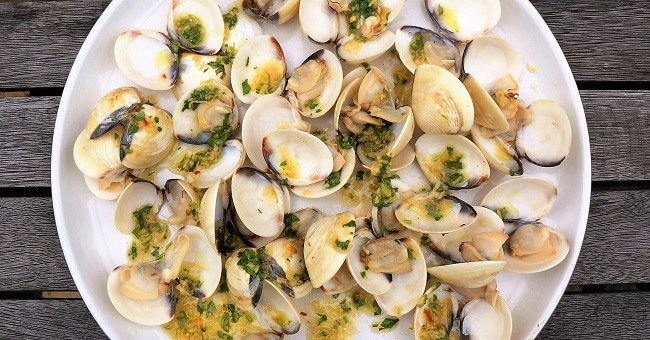 Grilled clams cooked on the BBQ with a Cambodian Ginger Dressing – I should stop writing now.

Soft succulent morsels of shellfish steamed in their own little shells. Combine those grilled clams cooked on the l with my Cambodian influenced ginger dressing and the smokiness from the BBQ and you’ll be licking the plate clean. Or maybe that’s why I don’t get invited to anyone’s BBQ anymore…

Grilled clams are awesome cooked over coals. Speaking of BBQ’s…it’s one of my favourite ways to cook and although they are invariably the calling card of a meat induced coma. Barbecued seafood is one of my favourite things to eat. It is always the catalyst to nostalgic memories of far-away lands, bathing in warm sunlight by an expanse of water and eating incredibly fresh fish simply over some charcoal, oh, and an ice cold beer.

And when you have great ingredients, like very fresh fish, the less you do to it the better. That being said, a little help in the flavour department never hurt.

Dressings should compliment, not camouflage the food…

When I first tried barbecuing clams it just seemed a bit weird if I’m being honest. Little rock hard marbles making a racket as I scattered them over a grill, there was nothing sensual about it –

– and damnit! I want my food to be a little sensual!

When you think about it however, clams are very pro-BBQ (well probably not if you asked them if they wanted to be scattered over a red-hot metal grill and cooked alive in their own shell). But if you didn’t ask them then I’m sure they’d be very pro-BBQ.

Clams on the grill are great, not only does their shell help to protect the flesh from drying out but the shells also create little pockets of air for the clams to steam, ensuring they stay soft and succulent. Clams (like most fish and especially shellfish) are incredibly fast to cook, clams only take a few minutes and they even tell you when they are done by opening their shells for you to eat them. Bless their hospitality.

You can’t be  selfish with grilled clams – they beg to be shared.

A lot like chips in that respect; you might want to eat them all yourself but they are just too easy for one to be stolen. Personally speaking, if we’re having a BBQ I’ll throw my grilled clams onto a big serving dish, drizzle them with my incredible ginger dressing (even if I do say so myself) and let everyone help themselves. Clams are a made to be shared, they are a gregarious lubricant, a conduit for social interaction. And I love that.

Anyway, enough clam. Let me tell you about my Cambodian Ginger Dressing!

I had been travelling around South East Asia for a couple of months by this time, and found myself sitting in a little wooden shack on a plastic chair overlooking the Mekong river in Cambodia with my then girlfriend.

The Mekong is at times tranquil, then chaotic. It was early afternoon and the river was quiet bar the odd boat, and we were doing what travellers do, we were doing nothing. But what we did do was eat, and I remember it vividly, whole fresh fish, straight out of the Mekong grilled whole over charcoal and served as is with a little dipping sauce on the side.

The dressing was sharp, slightly sweet, lots of citrus.. I couldn’t quite put my finger on it but the essence of the dressing is something I wanted to recreate.

This recipe isn’t an authentic ‘this-is-how-my-Cambodian-grandmother-makes-her-ginger-dressing-sauce’.

It is rather my version of ‘if-I-had-a-Cambodian-grandmother-this-is-how-I-imagine-she-would-make-a-ginger-dressing-sauce’.

A point to note – make the dressing in a jar as it’s really easy to shake and combine everything, obviously perfect for storing it in as well. This dressing tastes great an hour after you’ve made it and the flavours have had a chance to blend together; goes great with most shellfish and seafood.

TIP: To help smoke the clams while cooking, throw on some woody herbs (bay, rosemary, sage or even an overhanging twig from your neighbours apple tree) and close the lid for a couple of minutes. My BBQ doesn’t have a lid so I just use a sheet of foil or an upside down roasting tray to capture a little of the smoke, that’s if I can be bothered, otherwise I just cook them without.

So, the ginger dressing…

NOTE: If you want to make these in the oven, pre-heat to to (200c), scatter the clams on tray, loosely cover with foil and leave for about 3 minutes or until them open. 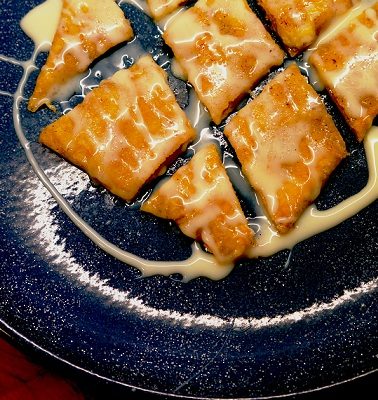 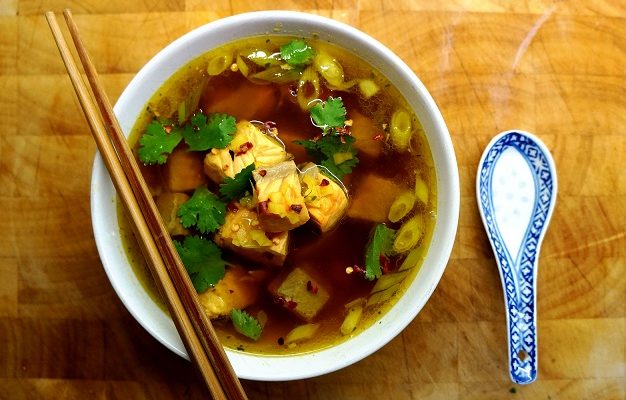