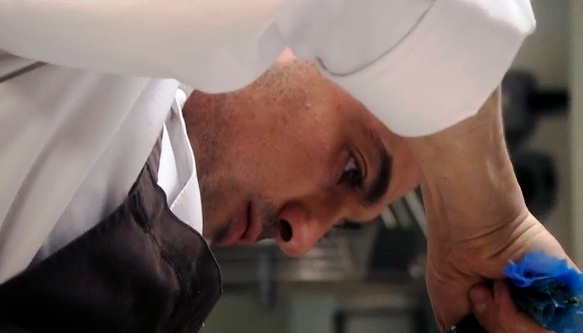 I’ve now officially changed my name by deed poll to Theo ‘that bloody fish soup’ Michaels’. It has been a surreal experience and I’ve been overwhelmed by the support of family & friends and really surprisingly; random strangers in the street and all the lunatics on twitter (inc. myself!) that have been rooting for me. I didn’t think I was that likeable. Entering the MasterChef semi-final heats leaves only 10 contestants out of the thousands that applied and the sixty that made the show. At this stage you are very much part of an elite group of excellent cooks. It is no longer who can cook the best, but more who will make a mistake..

This episode started off with us five contestants working in a professional kitchen. This was at the Caxton Grill under the watchful eye of Head chef Adam Handling who was inspirational to see in action and was a previous Professional Masterchef Finalist. We walked into the kitchen unawares of what station we would be allocated and I started to salivate as I saw octopus, lobster, fillet steak, ash, gels and other weird and wonderful concoctions… Then I heard it; ‘Theo; you’re on Chocolate Orange’ Damnit!!

Awesome experience and hats off to anyone that works in a kitchen – you have my respect. After this we had another invention test and surprise appearance from the formidable Marcus Wareing; I chose to do an upmarket fish soup (I thought it was awesome before I handed it over to the judges! Ha!:))

I need to pay tribute to the production team – I am amazed at the amount of cool people involved in producing a show like MasterChef; cheers guys. Also need to say a massive congratulations on the other four that made it through – a super-nice bunch of people and I hope one of them wins!

Well, this looks like enough of an Oscar speech for today, so, hit the ‘Subscribe’ button above and every now and again you’ll get a new recipe or travel story sent to your email by me. I know, I know, I’m just that nice..! I’ve noted below the official blurb from the BBC website which describes the episode in full.

Masterchef UK continues its tenth and most inspirational series yet. Of the hundreds that auditioned, 60 amateur cooks have been whittled down to the most promising ten. All of them have just one goal: to lift the coveted MasterChef Champion trophy. The competition is about to get serious as Knockout Week begins.

At the end of this week, only the best six can become semi-finalists. Over the next two episodes it’s a baptism of fire as the remaining ten contestants are split into two groups of five and get their first taste of professional cooking. In this episode the first group of five contestants head to a restaurant in London, where MasterChef: The Professionals finalist Adam Handling is head chef. During a busy lunch service, the five amateurs will be responsible for serving up every dish on the menu to paying customers. Who will falter as they cook in a completely unfamiliar and demanding environment?

Then, back at MasterChef HQ, the cooks face an invention test to show John and Gregg what they have learned. In a last-chance bid to stay in the competition, each contestant must show they can invent a dish from scratch that looks and tastes exceptional. They can choose from a plentiful array of seasonal produce that ranges from the everyday to top-end ingredients. In an unexpected twist, they present their food not only to John and Gregg, but also to renowned two-Michelin-starred chef Marcus Wareing, who helps John and Gregg evaluate the five amateurs.

After this, one of them will be going home. Who will crumble under the pressure and who will make it through to Friday’s challenge – the gateway to this year’s semi-finals?