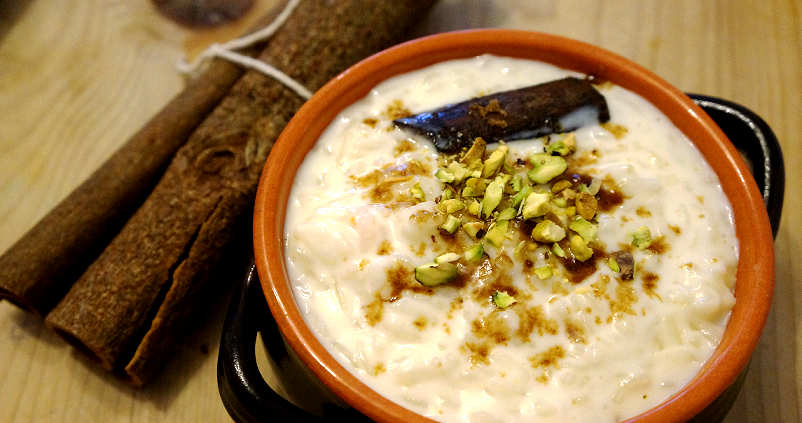 My Greek rice pudding recipe has hints of rose water, crunchy pistachios, sweet brown sugar with undertones of cinnamon and vanilla.. is your mouth watering yet?!

Rizogalo comes from the Greek; Ryzi meaning Rice and Galo meaning Milk – you get the picture…

This is the perfect refreshing dessert, using Arborio risotto rice it is incredibly easy (and relatively quick) to make but delivers on taste and indulgence everytime!

For me, Arborio rice is the perfect rice for this Rizo Galo recipe as it holds its shape and texture really well to avoid becoming a pile of mush but also exudes enough starch to avoid having to use cornflour, eggs or even cream in this rice pudding recipe. This is really a sweet risotto except a lot less fussy in terms of cooking process – but don’t tell the Italians I said that!

In saying all that, I must admit that if you are after a quick and easy dessert you can alter this recipe to use up leftover boiled rice. OK, it won’t win any awards and isn’t the same as the recipe below but the fundamentals are the same – a load of rice, lots of milk and sugar and reduce it down to a creamy texture.

Anyway, if you want to make the best damn rice pudding or rizogalo you’ve ever had; read on…

Served warm or cold – garnish with a pinch of ground cinnamon, crushed pistachio nuts and a dried rose petals if using.

Goes well with a warm summers day or late at night to satisfy a bad case of the munchies! 🙂