Oven Dried Tomatoes – made at home and stored in olive oil 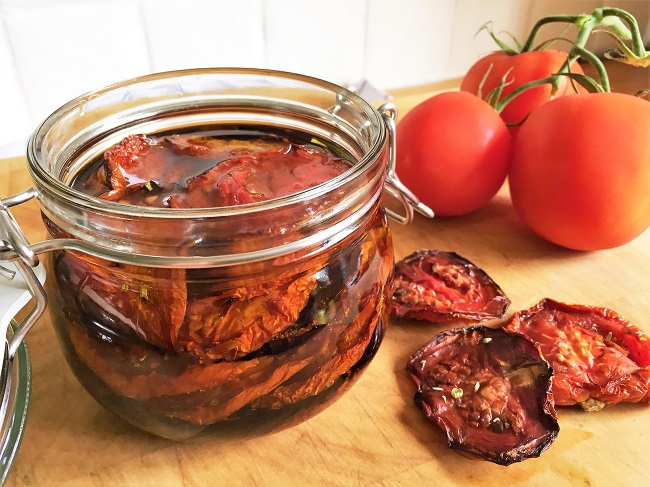 Oven Dried Tomatoes – Made at Home and Stored in Olive Oil 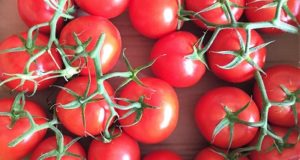 Oven dried tomatoes really do get better with age (well a day or two anyway).

I store my oven dried tomatoes in olive oil for a couple of days to help enhance their flavour, softening it a little as they become even more sweeter, tomato-y and scrumptious.

If you are lucky enough to spot a bunch of gorgeous tomatoes and find that you’ve been slightly over-zealous in your purchase (I bought two boxes…) or you’ve a glut of toms from growing your own; this recipe is for you.

The thing is, oven dried tomatoes just look and taste so damn good! But I definitely recommend you let them steep in good quality of olive oil for a couple of days to really enjoy them.

There are a lot of variations when it comes to making your own oven dried tomatoes; some will salt and let them rest for an hour, others remove the seeds, some cook low for 8 hours, other fast on a high heat.

When it comes to something as rustic and nostalgic as oven dried tomatoes I tend to head towards the route of simplicity. The method that I think is most authentic to what a grandma in a small village would make.

Thus I don’t think grandma would remove seeds and everything else. I don’t think she would do much more than stick them in the sunshine with some choice olive oil and herbs.

On that note (not the priest and actress – the grandma keeping things simple) I’ve gone for the simplest route that works for me and always creates delicious oven dried tomatoes that I pop into a jar of olive oil and devour on pretty much an hourly basis until they are gone.

And then I make some more.

I’ve tried putting them in extra virgin olive oil but find the strong flavour of extra virgin can sometimes over-power the tomatoes, best option is for a regular olive oil.

Another tip; if you see tomatoes in the ‘reduced’ section of the supermarket (apologies to Julie for stalking you around the supermarket whilst you reduced all the items); they usually make the best oven dried tomatoes.

You don’t want bruised or moldy or gone-bad tomatoes that are soft; but you do want ripe.

Ripe teetering on the edge of bad.

They are perfect; sweet, bright red and looking to fulfill their raison d’etre of being devoured with the respect and enjoyment they deserve. I usually opt for plum tomatoes but any will do (but the sweeter the better). Here’s how…

Tip: you can add to the jar a clove of garlic, chilli or even some more herbs for added flavour combinations – but just on their own they are delicious.

Goes great slathered on toast straight out of the jar, thrown into pasta or even as the base of a lush salad!