Fugu Fish, Travelling Japan and a lesson in Respect 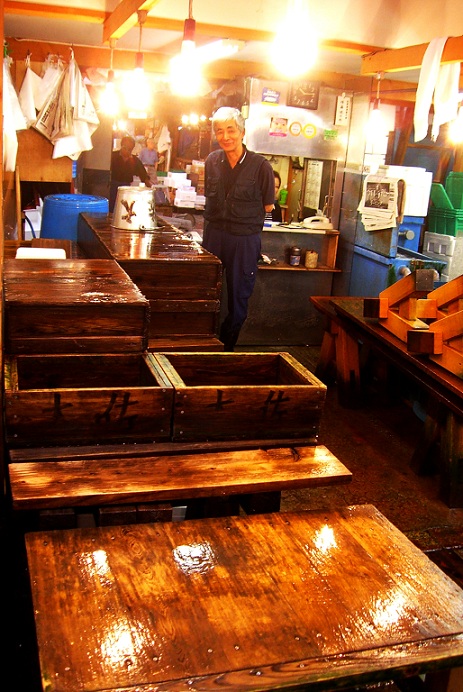 Fugu Fish – ever heard of it? No? Well, this cute little puffer fish is a delicacy in Japan and if not prepared correctly will kill whomever eats it.

After my last experience of eating Japanese street food (which didn’t go down well – literally) we strayed from safety to indulge in the infamous Fugu fish (also known as the puffer-fish).

One wrong cut while preparing the fugu fish guarantees the diner instant death – it is one of the most poisonous fish in the world. So let’s eat that then.

So when I ordered it, raw of course, I offered Anna the first bite. She kindly refused (`you think I`m stoopid or what Theo?!`), but I dived in and after Anna gave me about 3 minutes to see if I changed colour she also indulged in the meaty but slightly bland translucent flesh of our killer fugu fish.

Fugo fish, personally isn’t something I would search for again. I think the novelty of it may outweigh the actual flavour.

Anna and my differences in palates were rarely seen except on one occasion when as we walked down the street together Anna was tucking into a sneaky portion of KFC while I enjoyed the gastronomic flavours of eel intestines (still a step up from freshly licked termites off a tree in the jungle let me promise you).

We visited the amazing Tsukiji Fish Market in Tokyo – which is quite simply HUGE with a capital F. And here is an extraordinary note –

the Japanese when shipping fish from afar, to keep them fresh, actually have perfected the art of `aquatic acupuncture`.

They actually manage to place needles in certain parts of the larger fish to send them into a deep sleep, where upon arriving at the auctions they remove the needles and the fish awake!

Personally I have still not managed to fully comprehend how amazing that is, they are legends. I bloody love the Japanese for that.

Japan offers any visitor a crash course in total & utter respect and order. On one occasion, as a bus arrived late one man was heard whispering `bus, 3 minutes late, very shameful….` as he shook his head in disgust.

When drinking in a bar and leaving, the barman will walk you to the door, follow you outside and keep bowing to you until you are no longer in eyeshot. On our bullet train, once the conductor had reached the end of the carriage, he would flamboyantly turn, face the carriage and bow to the passengers before continuing his ticket collecting in the next carriage. And it is clean, like Immaculate Conception clean. Their queuing ability makes England look haphazard and until now I thought we could win gold medals for queuing.

My visage was dented by a well dressed old man wearing white gloves standing in the street facing the pavement with his nob fully hanging out, taking a piss for all the world to view – it seems, although it is rude for men to show their belly or a woman her cleavage, this one essential bodily function is still quite acceptable.

A final thought on Japan.. The people are wonderful and the country beautiful, littered with gold temples and shrines and a warmth of heart that embraces you if you let it. They are a nation of compartmentalised personalities, by day and at work they are formal, reserved, humble. By night in the setting of an alcohol producing waiter they unleash a social monster feasting on Karaoke and conversation, inhibitions stripped they gorge on westerners and enjoy the banter.

Many occasions on our short stay we found ourselves singing Hey Jude with a hostess of a Karaoke bar whom would not be out of place as a madam for lesser reputable establishments.

Which again, I love.