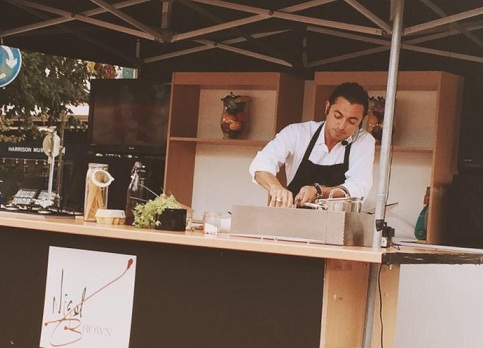 I love food festivals! And this years Harpenden and St. Albans food festivals were no exception. This year has to be the busiest yet and featured some awesome foodies of all walks of life; producers, chefs, farmers and tons of people just strolling around enjoying some amazing grub and watching a few chefs get up to mischief.

The sleepy little town of Harpenden had quite an awakening last Sunday as hundreds (thousands? Nah, maybe not thousands) of people descended onto the town to enjoy a morning strolling around the farmers market buying some great stuff from lots of local producers and then enjoyed an afternoon of sunshine scoffing tons of amazing food.

St. Albans Food Festival the following week didn’t fail to deliver on it’s promise on a great food festival either! The smells and smoke of sizzling, baking, foaming, frying food was meandering through the afternoon air and was packed with people having a great time.

I was lucky enough to be invited back for my second year to host a cooking demonstration at both. 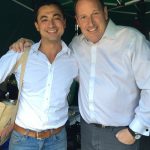 Me & Nigel Brown – err…I never called to find out what he was wearing!

I always love doing the Harpenden Food Festival as being my hometown (or since having kids anyway!) there are always loads of friendly faces and I was on stage again with chef Nigel Brown who’s a great compère (and chef!).

For this demo I whipped up some of my lovely Parmesan Baskets and made a really simple and delicious Spaghetti Carbonara (both links have my video recipe as well if you want to watch how to make them).

As is become tradition with my cooking demo’s in Harpenden, both my kids invaded the stage with shrieks and squeals to nick some of the food and generally get a massive kick out of being a little naughty (don’t tell them, but I kinda love them doing that).

Then I hit St. Albans Food Festival the following week.

In St. Albans I was on stage with Jonny Seabrook from Verulam Radio who was a super nice guy and I decided to pull together my signature Feta & Spinach Balls on Watermelon Carpaccio.

Lots of raised hands to nab a taste at the end and surprised at how quick the rest of my watermelon went!

Overall a great couple of weeks and really good to see that each year the local food festivals seem to get better and better. Now, just need to work out what am I gonna cook next year…?