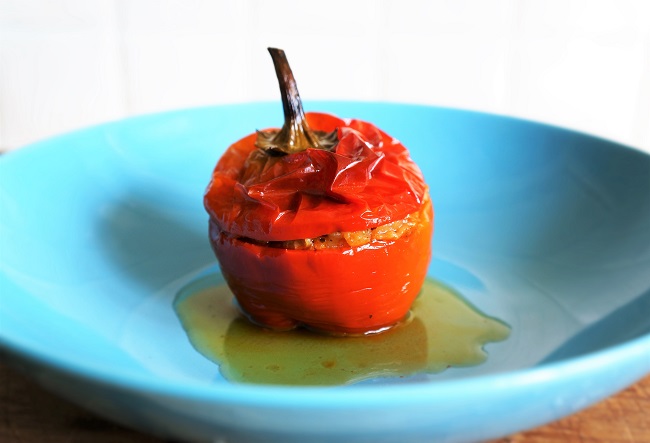 In fact, Gemista is Greek for any stuffed vegetable roasted whole, usually stuffed with rice. Typically stuffed peppers or beef tomatoes are the most popular.

Gemista (Greek stuffed peppers and tomatoes) work amazingly well as a vegetarian recipe by leaving out the mince meat – but either way it comes out delicious.

Greek stuffed peppers range from a vegetarian’s delight to a carnivorous fix, they are pretty easy to make and are brilliant for feeding the family.

Gemista, pronounced yemista is one of those dishes I remember from growing up and something I always enjoy when I visit my folks and my mum makes them. Greek stuffed peppers are laced with nostalgia and taste bloody fabulous – especially with a drizzle of gravy on top!

Stuffed peppers tend to be the most popular vegetable to stuff and roast – but if truth be told – it’s the stuffed aubergine (or eggplant!) at my mums house that the family fight over!

The great thing about Gemista or Greek stuffed peppers is once you’ve made the stuffing you can use this for pretty much anything that can hold it; stuffed bell peppers are the obvious choice, but stuffed aubergines, stuffed courgettes (or stuffed zuchinni!), stuffed beef tomatoes are to die for and if you’ve got a delicate hand (and sharp knife) a stuffed onion is a thing of beauty.

For the purposes of this gemista recipe I’m going to stick with stuffed peppers – but remember, you can swap that humble pepper for anything else that you can whittle the insides out of and fill with stuffing. But first, here’s a few things to note:

250g mince meat (I like lamb but pork or beef mince works fine).

100ml chicken stock (water will do)

Handful of chopped parsley, coriander, any other herbs you want.

Good hit of salt and pepper

* you can use any other vegetables you want

Serve with a nice side salad and a drizzle of your favourite gravy!