River rafting in Yangshuo and the Pet Stir-Fry I can’t mention.. | Backpacking through China 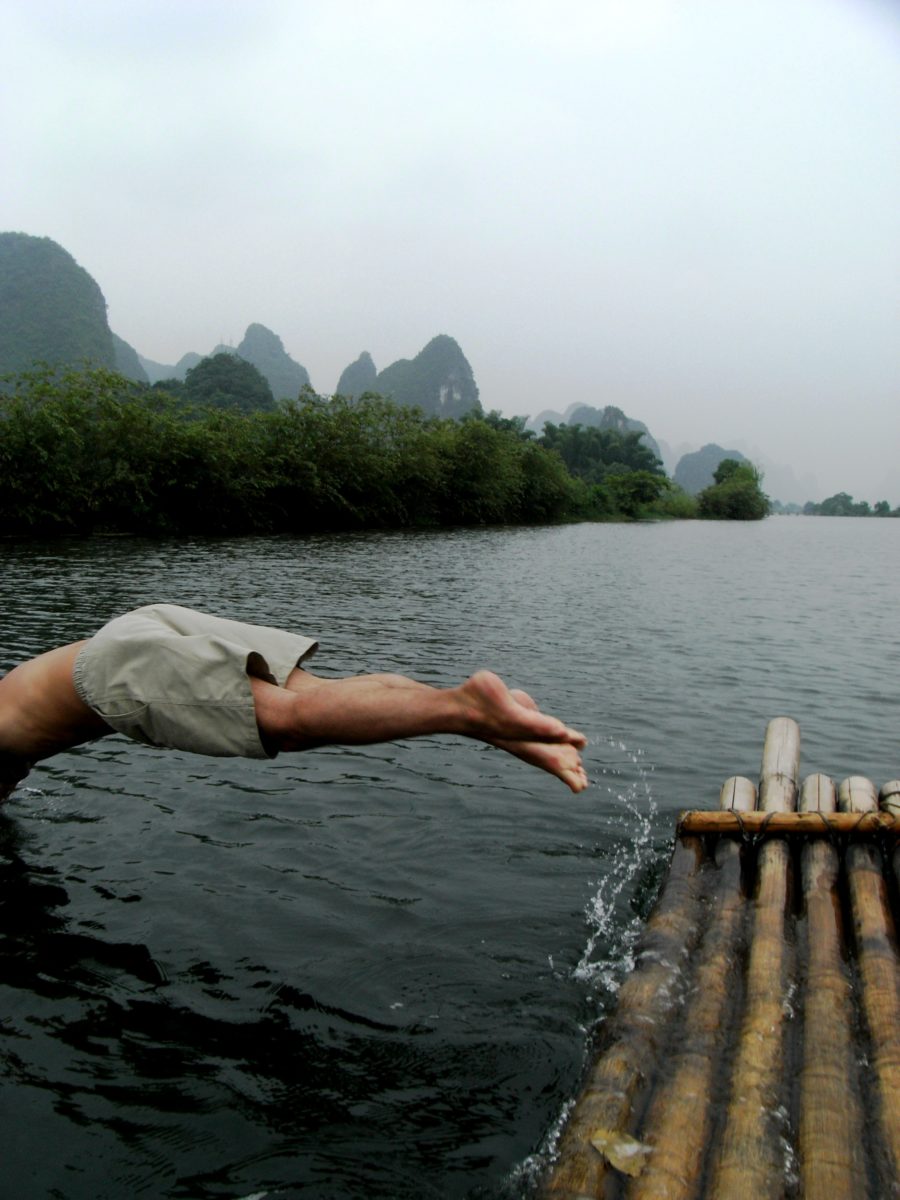 Yangshuo offers a feast for backpackers travelling through China.

Yangshuo offers an irresistible street market selling Chinese antiques that for the first time you hope are ‘Made In China’.

A buzzing night food market that, well, I’ll get to that in a minute…

Paradise comes in the form of Yangshuo in the Guilin province of China. Limestone karst peaks sleep alongside the meandering Yulong river lazily flowing through the province.

We arrive via a hi-jacked bus from Shenzhen into Guilin in the early hours of the morning we head to our hostel, Mr Wei’s youth hostel to be exact, the Yangshuo Culture House.

Mr Wei’s is run by a family and dinner is served every night at 6pm. About 8pm all the travellers that have been backpacking through China sit around the table and gorge on an array of home cooked delights.

From pork and bamboo stir fry to traditional sweet and sour duck; the food is delicious and not a deep-fried chicken ball or bright red sauce to be seen.

The local area is also a banquet for the eyes, it is everything you imagine rural China to be and more.

To truly soak in the scenery, both metaphorically and literally, we hire a bamboo raft for a 6 hour trip down the Yulong river. The raft is punted by a local villager down river with the occasional rapid to drop down, while limestone karst peaks rise hundreds of feet in the air shadowing our journey.

They stretch out before your eyes and gently fade into the distance through a hovering ever-present layer of mist. Our only company is the water buffalo and local fisherman using their trained Cormorant birds to catch fish for them (that in itself is a sight to see). It is in a word – magical.

The fisherman punts along standing on a 12 foot bamboo raft, the birds swim along next to the raft diving in and out of the water and resembling a fleet of feathered dolphins.

The birds wear a neck-tie; just big enough to allow the birds to swallow small fish and just small enough to stop them swallowing fish deemed big enough for the fisherman’s basket. Once the fisherman returns to the bank, each bird coughs up its goods (relatively small fish) into his basket.

The relationship is forged over a lifetime. In good times the birds feed the fisherman, in hard times the fisherman feeds the birds. The beauty of symbiosis played out before as it has been done for centuries.

Our time at Mr. Wei and his family`s hostel and with the other backpackers travelling through China that we became good friends with was a cultural retreat, an oasis of hospitality and knowledge that we embraced and were sad to leave.

Our stay was extended to five days instead of two where we enjoyed morning lessons of Tai-chi (I was likened to a gangly hippy dancing in slow motion), calligraphy lessons, bamboo painting, participating in home cooking and the occasional midnight stroll through the food markets.

The food markets deserve a moment of consideration – they are amazing. The western equivalent of a food hall in Blue Water shopping center. To set the scene; as you walk towards the light; an orange glow appears in the air, the sound of generators and jet engine like wok burners fill your ear drums only complimented by the noise of dozens of locals having a midnight gossip. Old plastic tables and chairs dot the landscape; the smell is intoxicating as it is curious, there are literally dozens of food stalls selling every type of dish you can imagine and the majority that you can’t imagine.

Now, about those stir fry’s (look away if you’re squeamish!)

So myself and two guys from LA head out from the hostel one night after a sampling some local rice wine made in Yangshuo to buy another bottle and deliver some ice-cream to the girls. Two and a half hours later we arrive back, half cut with pitiful looks on our faces.

You see, as we left the hostel, a Neanderthal `hunter` feeling suddenly took us over as we entered the market, with our respective `gatherers` safe and sound in the hostel we were let loose in a drunken state to sample the local delicacies…this was concluded by indulging in a rat stir-fry (something I vowed never to eat), washed down with more rice wine and finally, sorry folks, braised dog stir-fry. And I really do have to apologise for this – but it is delicious.

Here puppy, puppy…. our trip around China continues, pet-free from here on in…

1 thought on “River rafting in Yangshuo and the Pet Stir-Fry I can’t mention.. | Backpacking through China”