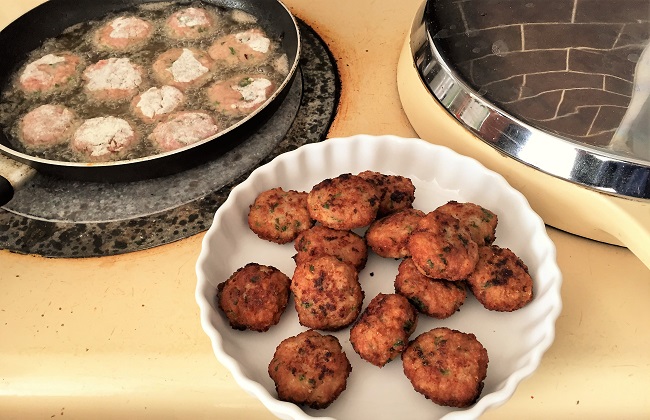 My Keftedes recipe is a traditional Greek meze dish; in essence they are Greek meatballs and are loved by everyone – I have literally never met a single soul that didn’t devour a handful of keftedes at any given opportunity!

Keftedes are delightful little morels of meat, the perfect party food, traditionally served at room temperature (but unstoppable when just cooked and hot!).

I always remember my Yiayia and Mum making keftedes as a kid; they would be standing next to the cooker, on one side would be a chopping board full of little round Greek meatballs dusted in flour with a slight white haze hanging in the air. In front the frying pan would be full and finally an empty looking plate on the other side that used to be home to a dozen freshly cooked Greek meatballs that now reside in several naughty little boy’s bellies…

My kids literally inhale keftedes – they are gone in minutes!

There is some debate when it comes to keftedes recipes; you know the drill – everyone’s Yiayia makes the best (Yiayia by the way is Greek for grandmother). My Yiayia used to add a shot of brandy as her secret ingredient, some use a mixture of lamb and pork, some beef…

Basically, do what you want, make them small, say it’s a Greek and you’ve got keftedes! 🙂

If you enjoy going Greek – check out some of my other Greek inspired recipes!

Goes well with a large appetite!