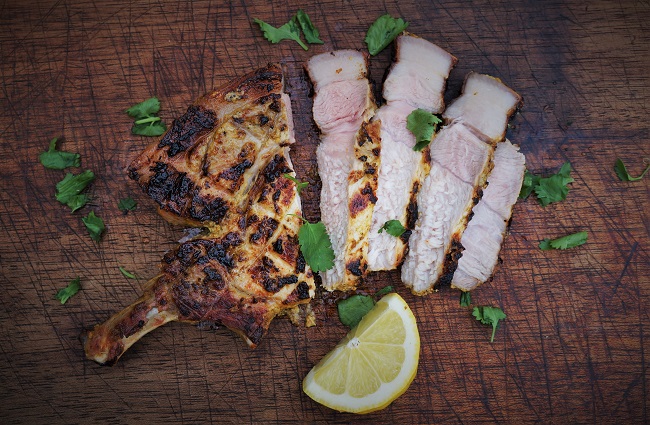 Uchucuta is a traditional Peruvian salsa predominantly made with chilli, herbs and cheese – but I love using it as a marinade for my Peruvian Pork Chops cooked on the BBQ.

Uchucuta is totally addictive, I use it as a marinade, a dressing and even a good old fashioned dip to help paint my nacho’s.

The Peruvians know how to make a salsa, there are actually quite a few Peruvian salsa’s, but Uchucuta is one of my favourites. I’m just starting to get into Peruvian recipes a bit more..

No, not just because it has feta in it, although that helps. Obviously feta isn’t a traditional cheese of Peru, but it makes a good substitute to queso fresco (fresh cheese) which is still made a lot in Peru.

I travelled through Peru years ago; trekked 4 days to Machu Picchu, ate guinnea pig in Cusco, became friends with Pisco sours, had lunch in Lima.. Peru is a beautiful country, and have a few tricks up their sleeves when it comes to food…and this is one of them.

In saying that, it was my mate Dave back in the UK who introduced me to his own homemade Peruvian salsa and it was lovely! So much so that it got me thinking of how I would make it and use it.

Nonetheless the next day I found myself knee deep in Peruvian salsa experimenting with different recipes and ideas.. (I still get stupid excited to start devising new recipes).

Usually served as a Peruvian salsa, it works equally aswell as a marinade and is perfect if you’re pork chops are cooked on the BBQ. Peruvian BBQ Pork if you like.

To be fair, pretty much everything tastes better when cooked on the BBQ – and my Peruvian BBQ pork chops are no exception!

Ultimately what I created was delicious and really hot. Mouth tingling hot, which I love, but if you want to tone it down a little just take note of my ‘tips’ in the recipe.

It’s got a kick like a mule and smells strong enough to burn your nasal hairs off!

But it’s not all about the sauce; it’s also about the pork. The beautiful thing that is the pork chop.

Now when I say pork chop I’m not talking those flimsy things found lurking in plastic containers in your supermarket.

I’m talking about pork chops with attitude. The ones that are thick, on the bone, with the skin and a hefty layer of fat.

A proper pork chop. A bad-ass pork chop. The sort of pork chop you are almost embarrassed to buy it’s so big and mean.

A bad-ass pork chop no less!

To get the best from your Peruvian BBQ pork chop, marinate the pork chop in the Uchucuta overnight and then stick it on the BBQ and you’ll be in love! The Peruvian marinade really comes into its own like this.

There is only one caveat – don’t overcook your pork chop. If cooking this on the BBQ as soon as the pork chop gets a nice deep char on the outside, take it off the grill and let it rest for a good 10 minutes (it will continue to cook from the residual heat) and it usually comes out just perfect.

Pork chops has to be one of my favourite cuts of meat, but they need to be big, thick and served slightly pink! Here’s a simpler pan fried Greek version if you just want a quick porcine fix!

20g fresh coriander (about a handful)

Sweetcorn kernels (cook on the BBQ until charred and then cut off the kernels to use as a garnish).

Goes well with an ice cold beer and some nacho’s to soak up that surplus Uchucuta dip! 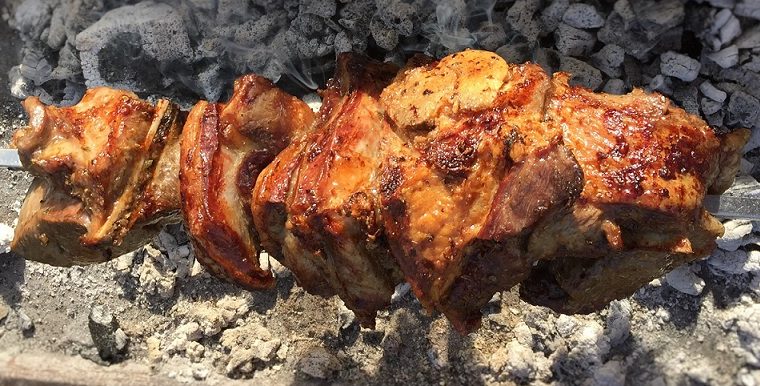 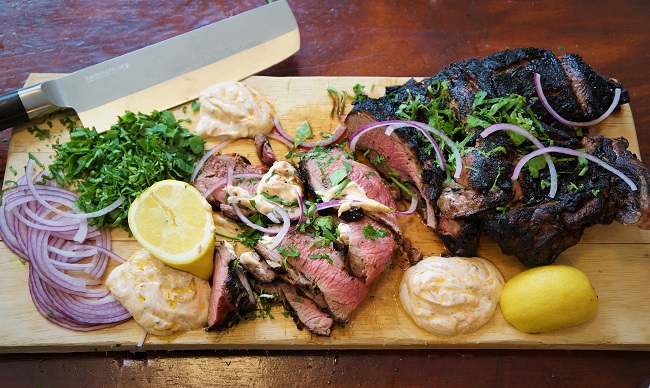 Greek inspired BBQ Leg of Lamb – specifically butterflied leg of lamb recipe served with harissa yoghurt. Butterflied BBQ leg of lamb is a wonder of the barbecue world and for something so easy to cook I don’t think gets center stage on the BBQ […]